Ottawa, ON, June 15, 2022 – Statistics  released today by the Canadian Real Estate Association (CREA) show national home sales were down in May 2022. 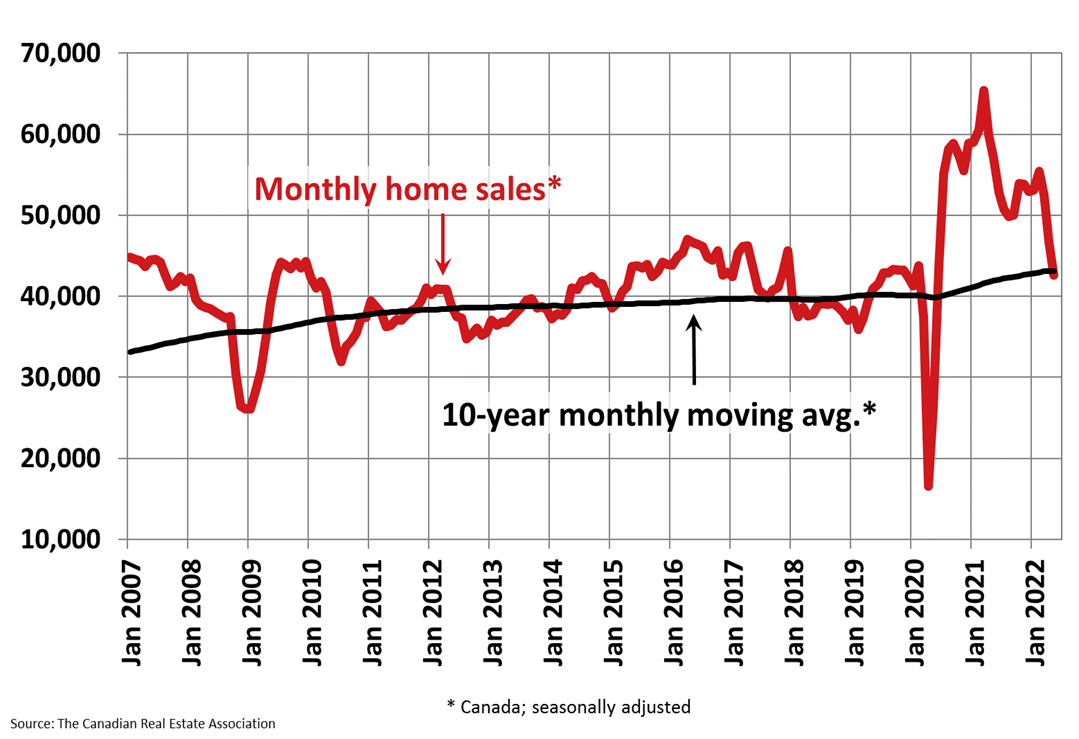 Home sales recorded over Canadian MLS® Systems declined by 8.6% between April and May 2022. This built on a larger drop recorded in April, leaving monthly activity at pre-COVID levels recorded in the second half of 2019 and only slightly above the 10-year average.

Sales were down in three-quarters of all local markets, led by a number of larger census metropolitan areas (CMAs) including those in the Lower Mainland, Calgary, Edmonton, the Greater Toronto Area (GTA) and Ottawa.

The actual (not seasonally adjusted) number of transactions in May 2022 came in 21.7% below the record for that month set last year. At a little over 50,000 units sold, the May 2022 sales figure was very close to the 10-year average for that month.

“May picked up where April left off, with sales activity continuing to slow and softening prices in many parts of the country,” said Jill Oudil, Chair of CREA. “Inventories are finally beginning to rebuild from record lows just a few months ago, although we still have major supply shortages almost everywhere. With all that being said, we are in a period of rapid change, but one that should settle to a more balanced housing market in time. As conditions continue to evolve, contact your local REALTOR® for information and the guidance you will need buying or selling in this current environment,” continued Oudil.

“Ultimately this has been expected and forecast for some time – a slowdown to more normal levels of sales activity and a flattening out of prices,” explained Shaun Cathcart, CREA’s Senior Economist. “What is surprising is how fast we got here. With the now very steep expected pace of Bank of Canada rate hikes, and fixed mortgage rates getting way out in front of those, instead of playing out steadily over two years, that cooling off of sales and prices seems to have mostly played out over the last two months.”

The number of newly listed homes climbed 4.5% on a month-over-month basis in May. The monthly increase was influenced by a jump in new supply in Montreal, while new listings in the GTA posted a small decline.

Almost three-quarters of local markets were balanced markets based on the sales-to-new listings ratio being between one standard deviation above or below the long-term average in May 2022 – the largest number since the fall of 2019. A little less than one quarter were in seller’s market territory, while a small handful were in buyer’s market territory.

There were 2.7 months of inventory on a national basis at the end of May 2022, still historically low but up by a month from the tightest conditions ever recorded just six months ago. The long-term average for this measure is a little over 5 months.

Regionally, most of the monthly declines were seen in markets in Ontario. While a majority of Ontario markets saw prices dip from April to May, a number were up, including in the northern and southern parts of the province and the eastern areas of cottage country.

Vancouver Island saw prices increase. In Greater Vancouver, prices were flat month-over-month in May, while further east prices fell modestly in the Fraser Valley and posted a larger decline in Chilliwack. Prices were more or less flat across the Prairies save for small gains in Saskatoon and Winnipeg.

Meanwhile, Quebec, New Brunswick and PEI continued to outperform with notable gains, while prices in Nova Scotia and Newfoundland and Labrador edged up slightly. 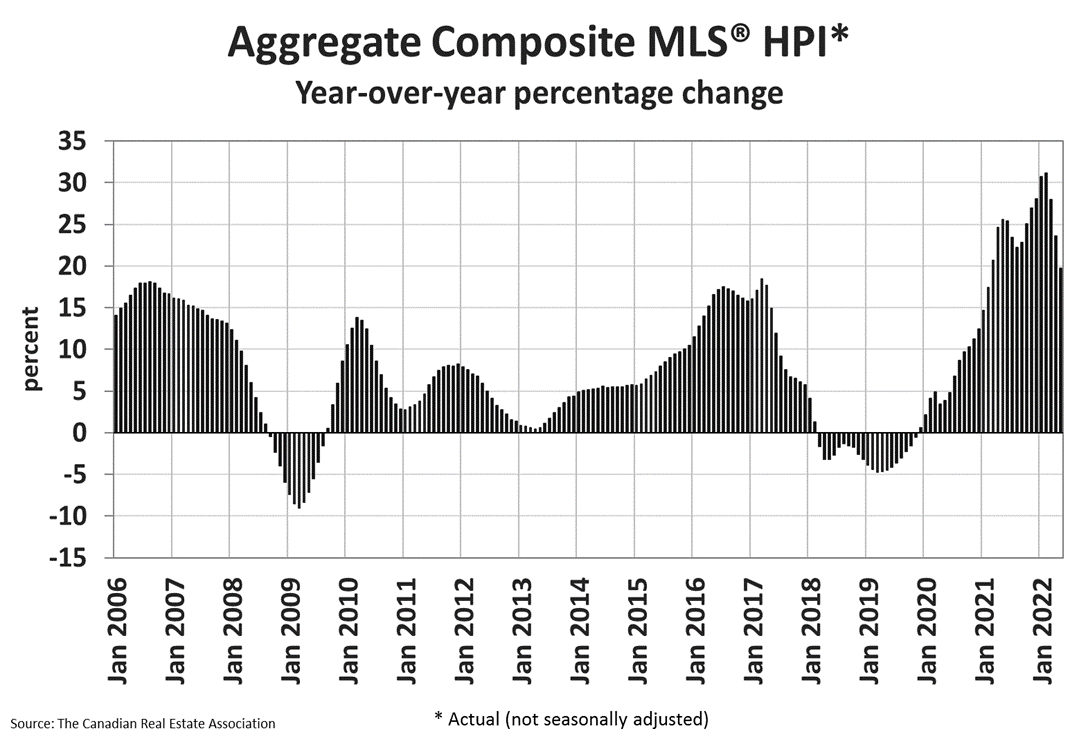 The non-seasonally adjusted Aggregate Composite MLS® HPI was still up by 19.8% on a year-over-year basis in May, although this was a marked slowdown from the near-30% record increases logged in January and February.

About The Canadian Real Estate Association

The Canadian Real Estate Association (CREA) is one of Canada’s largest single-industry associations. CREA works on behalf of more than 150,000 REALTORS® who contribute to the economic and social well-being of communities across Canada. Together they advocate for property owners, buyers, and sellers.