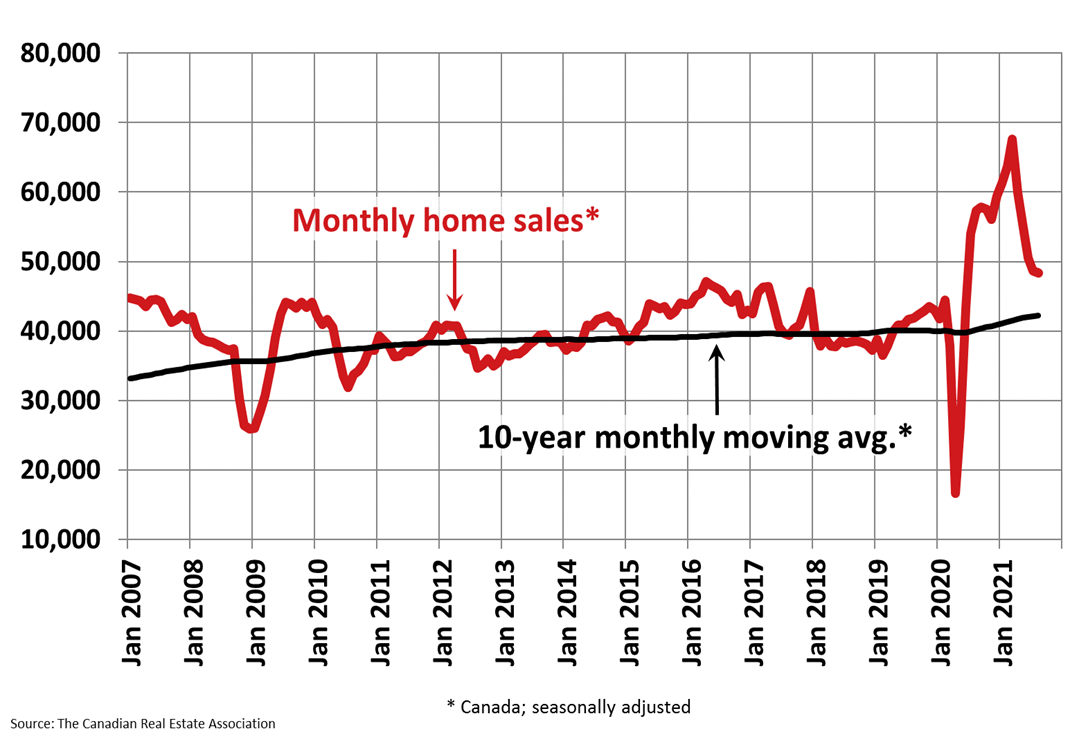 Home sales recorded over Canadian MLS® Systems edged back a slight 0.5% on a month-over month basis in August 2021, as transactions appear to be stabilizing at more sustainable but still historically active levels. (Chart A)

It was a fairly even split between the number of local markets where sales were up and those where they were down, and without any commotion anywhere. Small declines in the GTA and Montreal were offset by gains in the Fraser Valley, Quebec City and Edmonton.

The actual (not seasonally adjusted) number of transactions in August 2021 was down 14% on a year-over-year basis from the record set for that month last August. That said, it was still the second-best month of August in history.

“Ideas on how to fix the housing market have taken centre stage in this election, with many long-simmering issues having had a big spotlight shone on them over the last year-and-a-half by COVID,” said Cliff Stevenson, Chair of CREA. “The numbers for August provided more evidence of what many of us already knew or suspected to be the case –this housing crisis will not go away on its own. As such, it’s encouraging to see all of the major parties looking at longer-term solutions to an issue that’s been around for a while. It also highlights how there are no quick fixes here, so this market will remain challenging for those who choose or have to engage in it. That’s why your best bet is to consult with your local REALTOR® for information and guidance about buying or selling a home in these unprecedented times,” continued Stevenson.

“Canadian housing markets appear to be stabilizing somewhere in between pre- and peak-pandemic levels – which is to say, still extremely unbalanced,” said Shaun Cathcart, CREA’s Senior Economist. “As far as campaign promises around building more homes, at least we are finally having the right conversation. But as anyone who has tried to get even a small project done in the last year knows, availability of materials and skilled labour are not dials that can simply be turned up to 11 whenever we decide we need them. And that’s not to mention all the other barriers to building, of which there are many. It’s definitely easier said than done.”

The number of newly listed homes ticked 1.2% higher in August compared to July. As with sales activity, it was a fairly even split between markets that saw declines and those that saw gains. Among bigger Canadian markets, new supply declines in the GTA and Ottawa were offset by gains in Vancouver and Montreal.

Based on a comparison of sales-to-new listings ratio with long-term averages, a small majority of local markets remain in seller’s market territory. The remainder are in balanced territory.

There were 2.2 months of inventory on a national basis at the end of August 2021, down a bit from 2.3 months in July. This is extremely low – still indicative of a strong seller’s market at the national level and in most local markets. The long-term average for this measure is more than twice where it stands today. It was also the first time since March that this measure of market balance tightened up.

The Aggregate Composite MLS® Home Price Index (MLS® HPI) rose 0.9% month-over-month in August 2021. In line with tighter market conditions, this was the first acceleration in month-over-month price growth since February. While the trend of re-accelerating prices was first observed earlier this summer in Ontario, the reversal at the national level in August was less of a regional story and more of a critical mass story. Synchronous trends across the country have been the defining feature of the housing story since COVID-19 first hit, and that still appears to be the case. 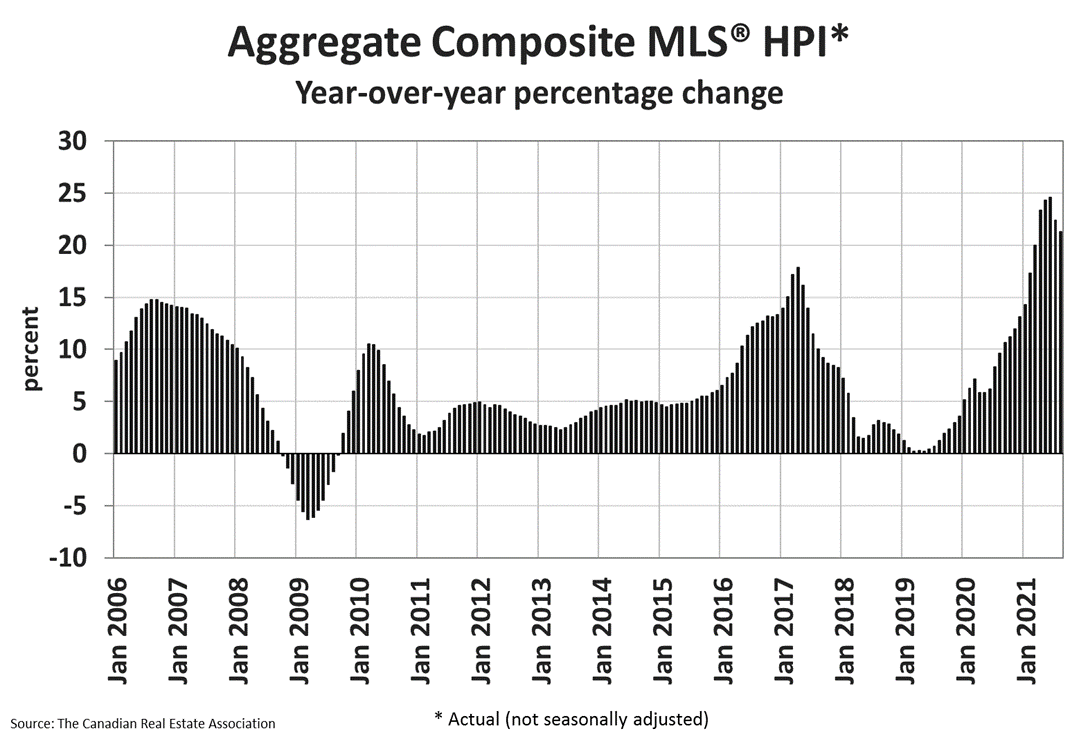 The non-seasonally adjusted Aggregate Composite MLS® HPI was up 21.3% on a year-over-year basis in August.

Looking across the country, year-over-year price growth is averaging around 20% in B.C., though it is lower in Vancouver, a bit lower in Victoria, and higher in other parts of the province. Year-over-year price gains are in the mid-to-high single digits in Alberta and Saskatchewan, while gains were a little over 10% in Manitoba.

Ontario saw year-over-year price growth still over 20% in August, however, as with B.C. big, medium and smaller city trends, gains are notably lower in the GTA, around the provincial average in OakvilleMilton, Hamilton-Burlington and Ottawa, and considerably higher in most smaller markets in the province.

The opposite is true in Quebec, where Greater Montreal’s year-over-year price growth, at a little over 20%, is almost double that of Quebec City. Price growth is running a little above 30% in New Brunswick (higher in Greater Moncton, a little lower in Fredericton and Saint John), while Newfoundland and Labrador is in the 10% range on a year-over-year basis (a bit lower in St. John’s).