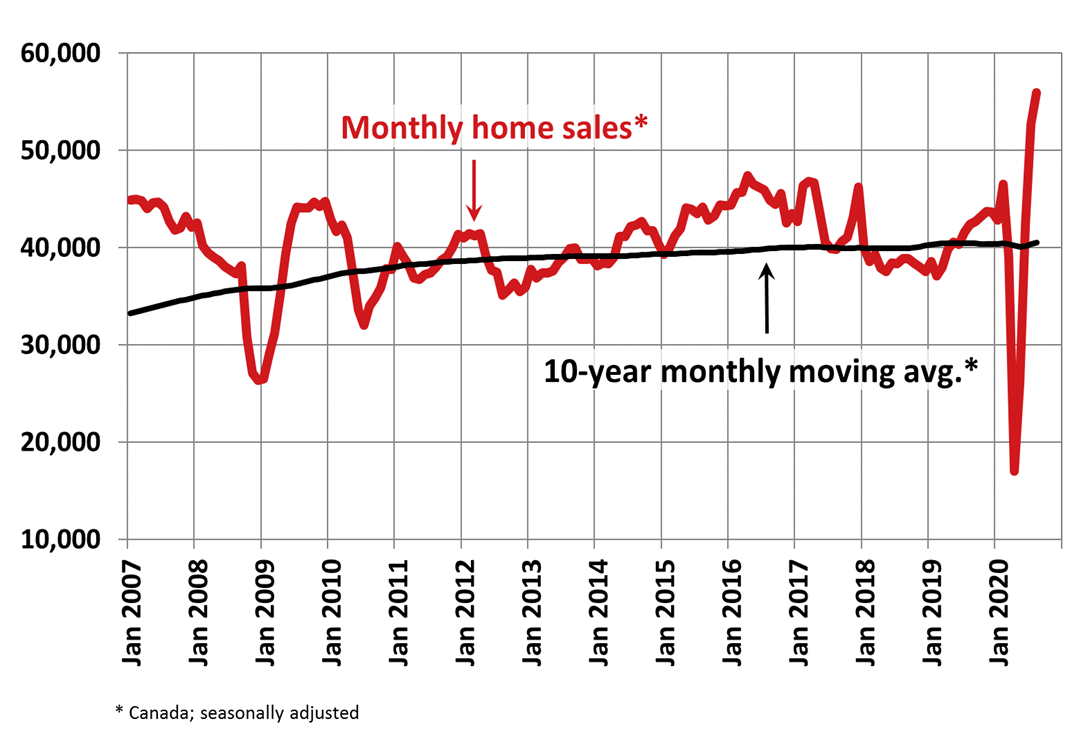 Home sales recorded over Canadian MLS® Systems increased a further 6.2% in August 2020, raising them to another new all-time monthly record.

Unlike the previous two months in which activity was up right across the country, sales in August were up in about 60% of local markets. Gains were led by the Greater Toronto Area (GTA) and British Columbia’s Lower Mainland. With ongoing supply shortages in so many parts of Canada, it is interesting to note that the GTA and Lower Mainland also saw a considerable amount of new supply become available in August.

Actual (not seasonally adjusted) sales activity posted a 33.5% y-o-y gain in August. It was a new record for the month of August, and the sixth-highest monthly sales figure of any month on record. Transactions were up compared to last August in almost all Canadian housing markets.

“It has been a record-setting summer in many housing markets across Canada as REALTORS® and their clients play catch up following the loss of so much of the 2020 spring market,” stated Costa Poulopoulos, Chair of CREA. “Many markets dealing with inventory shortages have been seeing fierce competition among buyers this summer; although, that was something that had been anticipated for 2020 prior to COVID-19. It really does seem that the spring market shifted into the summer. As conditions evolve into fall, we continue to make sure clients stay safe by complying with government and health officials’ directives and advice, including using technology to show properties virtually and to complete required forms and contracts. Now as always, REALTORS® remain the best source for information and guidance when negotiating the sale or purchase of a home,” continued Poulopoulos.

“It will come as a surprise to many that as of the end of August, home sales in 2020 had fully caught up to where we were at that time last year; however, that is somewhat of a low bar as the first half of 2019 wasn’t really anything to write home about,” said Shaun Cathcart, CREA’s Senior Economist. “A more useful comparison would be to ask where are we now versus where we thought we’d be before anyone had ever heard of COVID-19, and on that score there is still a lot of catching up to do. Despite some record monthly highs and lows this year, with eight months now in the books and activity showing signs of moderating in September, 2020 is looking like it will go down as a fairly middling year overall – weaker than in a non-COVID world but quite a bit better than we would have given it back in April.”

The number of newly listed homes posted a further 10.6% gain in August compared to July.

New supply was up in close to three-quarters of local markets, led by gains in the Lower Mainland, GTA and Ottawa.

With the August increase in new supply outpacing the rise in sales for the first time since the rebound began in May, the national sales-to-new listings ratio eased to 69.4% in August compared to 72.3% posted in July. That said, it was still among the highest levels on record for this measure.

Based on a comparison of sales-to-new listings ratio with long-term averages, only about a third of all local markets were in balanced market territory, measured as being within one standard deviation of their long-term average. The other two-thirds of markets were above long-term norms, in many cases well above.

There were just 2.6 months of inventory on a national basis at the end of August 2020 – the lowest reading on record for this measure. At the local market level, a number of Ontario markets are now into weeks of inventory rather than months.

The Aggregate Composite MLS® Home Price Index (MLS® HPI) rose by 1.7% m-o-m in August 2020. Of the 21 markets currently tracked by the index, m-o-m gains were posted everywhere but Victoria and elsewhere on Vancouver Island. 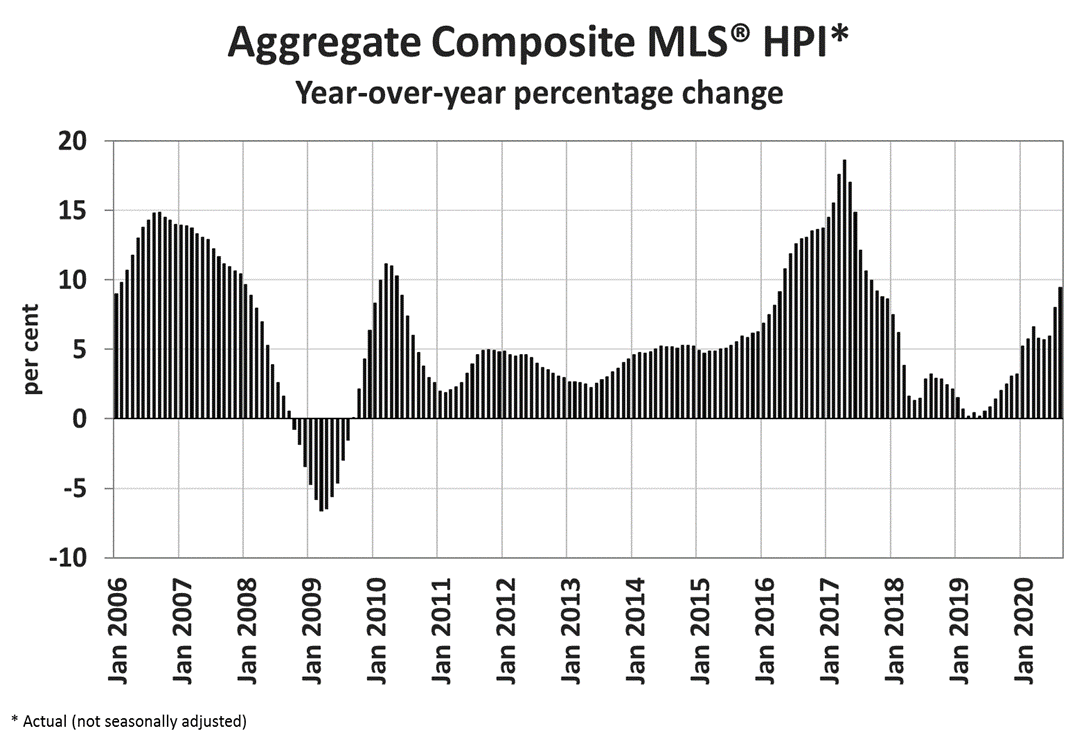 The non-seasonally adjusted Aggregate Composite MLS® HPI was up 9.4% on a y-o-y basis in August – the biggest gain since late 2017.

The largest y-o-y gains were recorded in Ottawa (+19.9%) and Montreal (+16.4%), followed by increases in the 10% – 15% range in the GTA and surrounding Greater Golden Horseshoe markets. Moncton prices were also up in that range in August.

The actual (not seasonally adjusted) national average home price set another record in August 2020 at more than $586,000, up 18.5% from the same month last year.