Ottawa, ON, July 15, 2021 – Statistics released today by the Canadian Real Estate Association (CREA) show national home sales were down between May and June 2021. 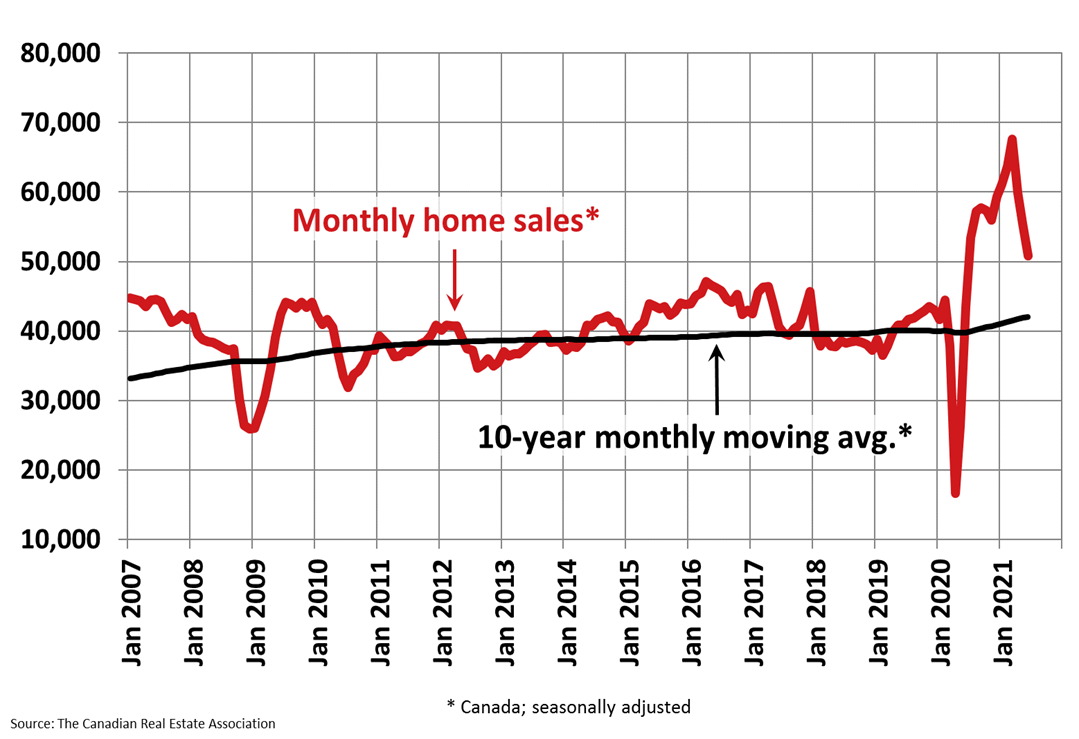 Home sales recorded over Canadian MLS® Systems fell by 8.4% month-over month in June 2021, marking the third straight monthly slowdown since activity hit an all-time record back in March. While sales are now down a cumulative 25% from their peak, and below every other month in the last year, June transactions still managed to set a record for that month. (Chart A)

Month-over-month declines in sales activity were once again quite broad-based, with sales moderating in around 80% of all local markets, including almost all large markets across Canada.

The actual (not seasonally adjusted) number of transactions in June 2021 was up 13.6% on a year-over-year basis and marked a new record for that month.

“While there is still a lot of activity in many housing markets across Canada, things have noticeably calmed down in the last few months,” said Cliff Stevenson, Chair of CREA. “There remains a shortage of supply in many parts of the country, but at least there isn’t the same level of competition among buyers we were seeing a few months ago. As these conditions continue to evolve over the summer and fall, your best bet is to consult with your local REALTOR® for information and guidance about buying or selling a home at this stage in the cycle,” continued Stevenson.

“It feels like maybe the theme of this summer is ‘slowly getting back to normal,’ in our own lives and for many housing markets across Canada as well,” said Shaun Cathcart, CREA’s Senior Economist. “That said, it’s a long road to get back to normal, and for many housing markets the main issue is that supply shortages are as acute as ever. At the same time, the break we’ve had on the population growth side of things is likely now coming to an end. So while the frenzy and emotion of earlier in the pandemic seem to have dissipated for now, the key ingredients of a seller’s market are all still in place. Housing has been a major election issue before and it will be this time around as well. The difference this time will likely be a focus on getting more housing built in the years ahead, so at least we’re finally having the right conversation.”

The number of newly listed homes edged back a slight 0.7% in June compared to May. In contrast to the past year’s synchronicity in demand and supply trends, the little-changed national new supply figure in June reflected a mixed bag of results, with about half of local markets seeing gains – welcome news for frustrated buyers.

There were 2.3 months of inventory on a national basis at the end of June 2021, up from 2.1 months in May and up from an all-time record-low of just 1.8 months in March. That said, it is still very much in seller’s market territory. The long-term average for this measure is a little over 5 months.

The Aggregate Composite MLS® Home Price Index (MLS® HPI) rose 0.9% month-over-month in June 2021, continuing the trend of decelerating month-over-month growth that began in March. That deceleration was initially seen more so on the single-family side; although, that trend is now also playing out in the townhome and apartment segments. 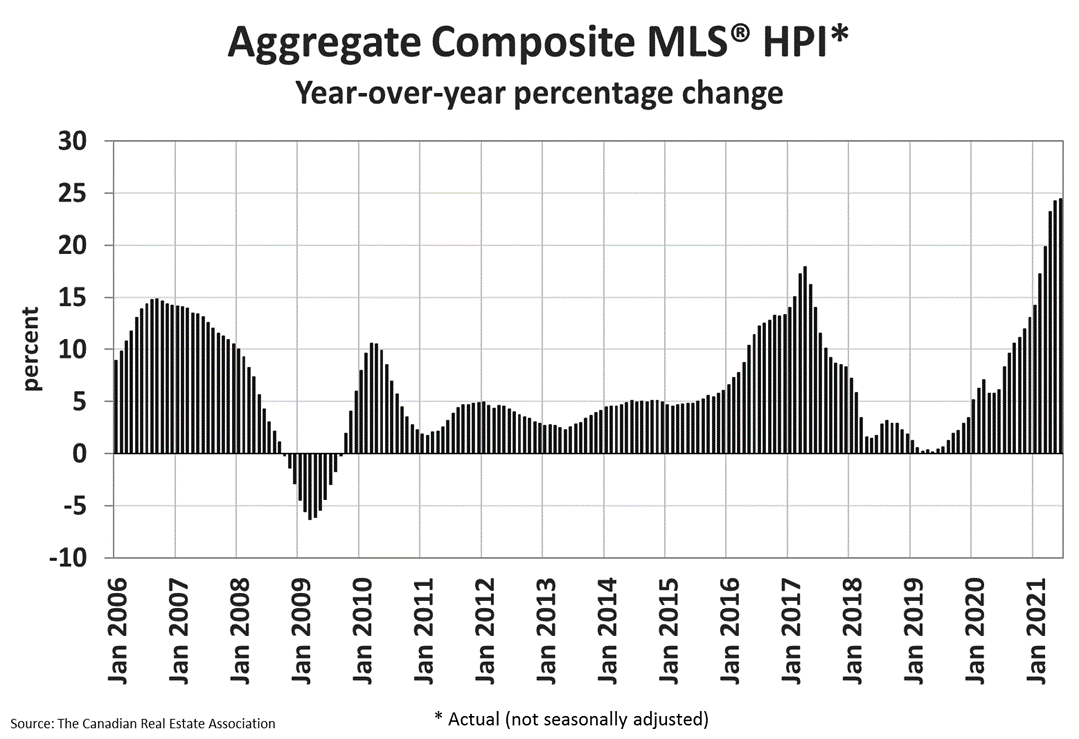 The non-seasonally adjusted Aggregate Composite MLS® HPI was up 24.4% on a year-over-year basis in June. Based on data back to 2005, this was another record yearover-year increase; although, given how price growth took off in July of last year, this June 2021 reading may end up being the peak for year-over-year growth. (Chart B)

Looking across the country, year-over-year price growth is averaging around 20% in B.C., though it is lower in Vancouver and higher in other parts of the province. Yearover-year price gains in the 10% range were recorded in Alberta and Saskatchewan, while gains are closer to 15% in Manitoba. Ontario is seeing an average year-overyear rate of price growth in the 30% range, however, as with B.C., gains are notably lower in the GTA and considerably higher in most other parts of the province. The opposite is true in Quebec, where Montreal is in the 25% range and Quebec City is in the 15% range. Price growth is running a little above 30% in New Brunswick, while Newfoundland and Labrador is in the 10% range.