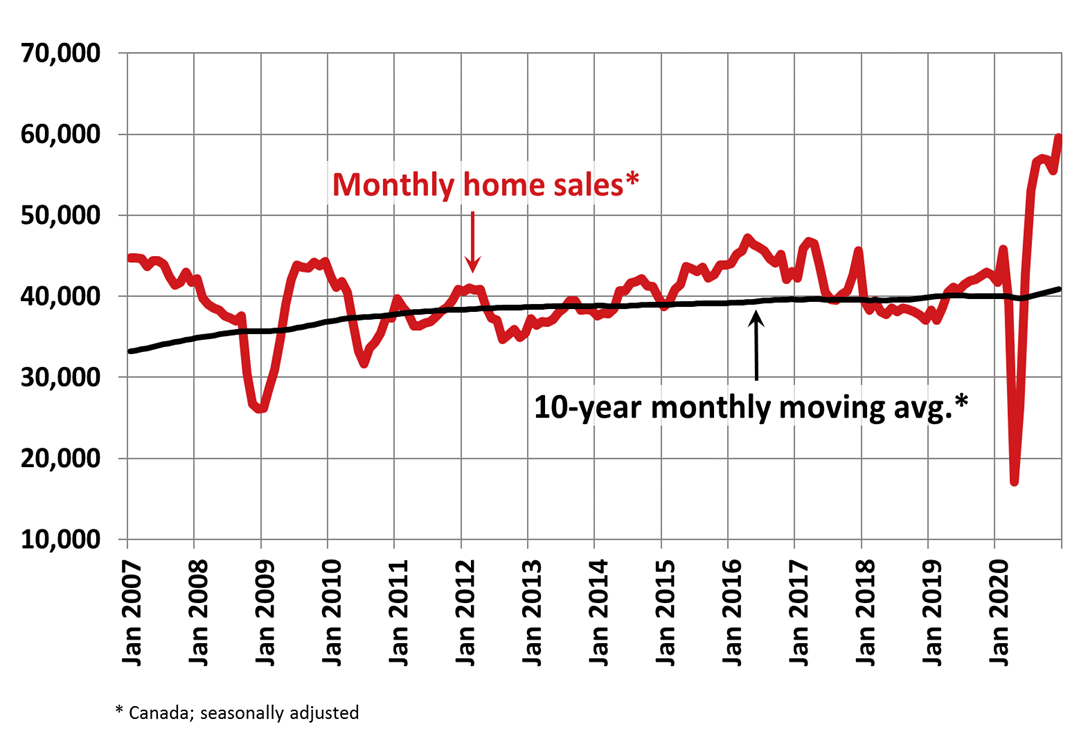 Home sales recorded over Canadian MLS® Systems jumped by 7.2% between November and December to set another new all-time record.

The month-over-month increase in national sales activity from November to December was driven by gains of more than 20% in the Greater Toronto Area (GTA) and Greater Vancouver.

Actual (not seasonally adjusted) sales activity posted a 47.2% y-o-y gain in December – the largest year-over-year increase in monthly sales in 11 years. It was a new record for the month of December by a margin of more than 12,000 transactions. For the sixth straight month, sales activity was up in almost all Canadian housing markets compared to the same month in 2019.

“It’s official, despite all the challenges, 2020 was a record year for Canadian resale housing activity,” stated Costa Poulopoulos, Chair of CREA. “While momentum continues into 2021, surging COVID cases and a return to April-like lockdowns in some provinces means we’ll be revisiting some of those virtual technology solutions to process deals in the first few months of the year. Hopefully we’ll have the current wave more under control by the time the spring market rolls around, which is shaping up to be a very active one. In the meantime, we will remain extremely vigilant, as we have all along, in adhering to government and health officials’ directives to keep our clients safe. Now as always, REALTORS® remain the best source for information and guidance when negotiating the sale or purchase of a home,” continued Poulopoulos.

“The stat to watch in 2021 will be new listings, particularly in the spring – how many existing owners will put their homes up for sale?” said Shaun Cathcart, CREA’s Senior Economist. “We already have record-setting sales, but we know demand is much stronger than those numbers suggest because we see can see it impacting prices. On New Year’s Day there were fewer than 100,000 residential listings on all Canadian MLS® Systems, the lowest ever based on records going back three decades. Compare that to five years ago, when there was a quarter of a million listings available for sale. So we have record-high demand and record-low supply to start the year. How that plays out in the sales and price data will depend on how many homes become available to buy in the months ahead. Ideally we’d like for households to be able to find and acquire the homes that best suit their needs and for housing to remain affordable, but the fact is we’re facing a major supply problem in 2021.”

The number of newly listed homes climbed by 3.4% in December, led by more new listings in the GTA and B.C. Lower Mainland, the same parts of Canada that saw the biggest sales gains in December.

Based on a comparison of sales-to-new listings ratio with long-term averages, only about 30% of all local markets were in balanced market territory in December, measured as being within one standard deviation of their long-term average. The other 70% of markets were above long-term norms, in many cases well above.

The Aggregate Composite MLS® Home Price Index (MLS® HPI) rose by 1.5% m-o-m in December 2020. Of the 40 markets now tracked by the index, only one was down between November and December. 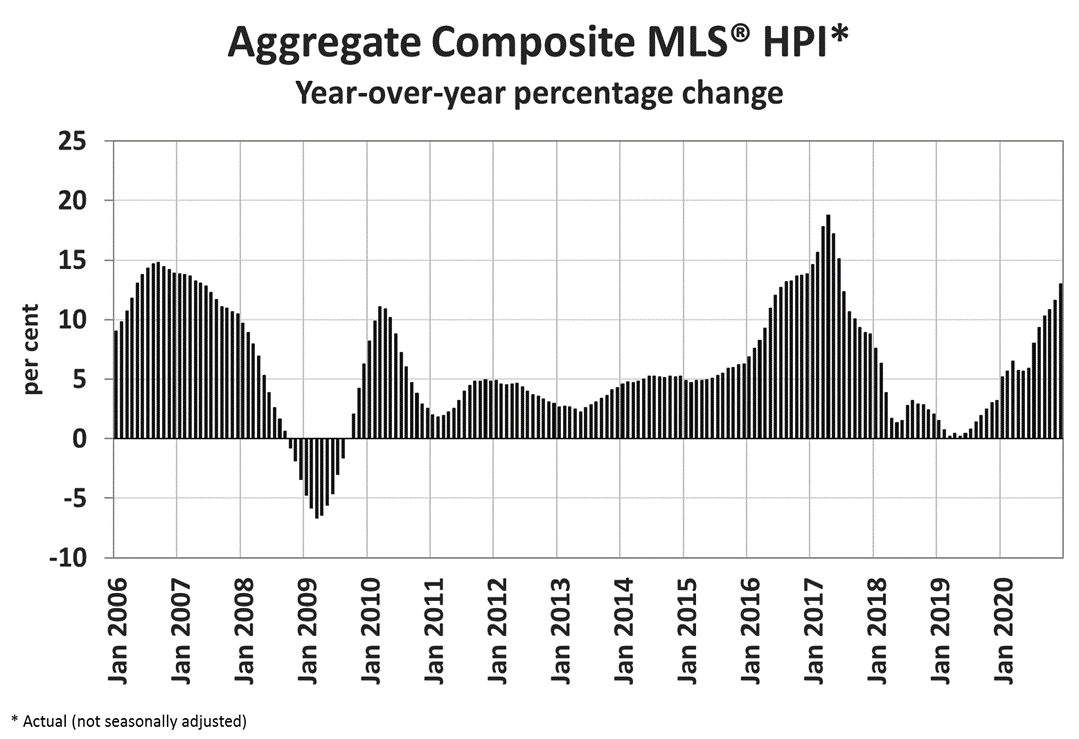 The non-seasonally adjusted Aggregate Composite MLS® HPI was up 13% on a y-o-y basis in December – the biggest gain since June 2017.

The largest y-o-y gains – above 30% at this point – were recorded in Quinte & District, Simcoe & District, Woodstock-Ingersoll and the Lakelands region of Ontario cottage country.

Prices were up in the 15-20% range compared to last December in Oakville-Milton, Peterborough and the Kawarthas, Montreal and Greater Moncton.